Firstly on behalf local people here i have some greeting to you all and wish you have got Vietnam trip or holiday that full of fun and smiles. I’m Vinh-Glory was born and grew up in Hoi an – a world heritage city (central part of Viet nam). Since at my childhood i had got a strongly dream of traveling around world to find out newthings, newlands, meet new strangers … to fullfil my desire having got at knowlegde, custom, behavior, cultrure ,… Thoses are different from my home Viet nam. So thus, i had learnt hard in Cultrue, Art, Literature. History, and English to heading my aim. Such as, i alway a excelent studen at all grades of school from primary untill university to thoses subjects. But still be a long wait, my dream didn’t come true because of many reasons that arisen from my country rules, situation and myself also, Luckily, in while blooming of global tourism, my country was choosing a favourite  destination for world tourists and my hometown Hoi an-one of the most crowded foreign travellers of Viet nam. I quickly submerged in tourism industry in my town since 1995 with a lot jobs: Receiptionist, Interpreter, Hotel, restaurant manager, Tour operator…and just now a experienced guide. A long time while working as a tour guide for several partners, tourism agencies nationwide either worldwide. I realize that I can arrange the local tours better  theirs  and  decide  my own:  Glory Hoi an tour –  My  website: www.gloryhoiantours.com.

I’m very happy and proud to be A BRIGDE connecting you all to my local areas throught Viet nam, specialy: Hoi an-My son-Da nang -Hue….the most attractive road crossing three world heritages with much mysterious and new, strange things that you never have got eve …….. each day is book opening, meeting some one is exciting waiting, we have more new more strange to love …… Let’s be your eye  witness…let me your local buddy! I arrange tours throught Viet nam but I have tend to centre, my home Hoi an – Da nang – Hue- Phong Nha – DMZ … and focus to individuals, families, small group from 2 to 15 or 20 … my tour bring you the itinerary: flexiblely, freely, hassle – free, leisure, comfortablely … because I understood your expectations, needs, interests … So if you have some draft, or you wonder about … don’t hesitate tell me on phone or email… zalo, facebook, what app, viber chat … I will quick reply and meet your requires … show you best way to fitting your ideas, orther wise I will recommend you general first, you can sellect and customize from thoses ….. Inshort, your idea meet my expert a ideal meeting would make a tour that belived full fill satisfaction, certainly. My tour mention out of beaten roads, lovely but remarkable, the essense of landmark, truely and exactly beauty of nature, ordinary life …. absorbed depth the past and recent, thoses ‘s less but more … too different the tour planning and fix schedue pave to local  people  practice  it  with a  team  romotely  operate  from  aircon – offices …

HOI AN URBAN AND SURROUNDINGS Hoi an meams  Peaceful Meeting Place, Meeting of many big rivers of centre ,meeting of many  cultures and different peoples: Cham, Viet, China, Japan, French, 800 year old city, Hoi an is metropolis of  “Quang nam nation” the most hectic and  thriving commercial port in Asia dating from 16-18 century,  Which 150 inhabitants ,it lie on valley at the mouth where pouring on of 3 rivers Thu Bon, Truong Giang,  Vu Gia before flowing to ocean; urban ,rurals, rivers, sea .. connect together closely distance make it cover all the traditional lifestyes of Vietnamese: Faming, fishing, Silk weaving, Pottery, Embroidery, Lacquer ware…  In general ,Hoi an is a distinctive Vietnam of centre, unique and colourful cultrure of East and West…..  the enchanting, intriguing charm of Hoi an expose some where on winding, narrow streets or mossy brick  roofs .. fading in time over ,either hidden and dissolve into  each family’s habit, maket, temple, pagoda …  each grass, river, sea , estuary…Hoi an is a  luxury modern condition in a fairy dreamming world 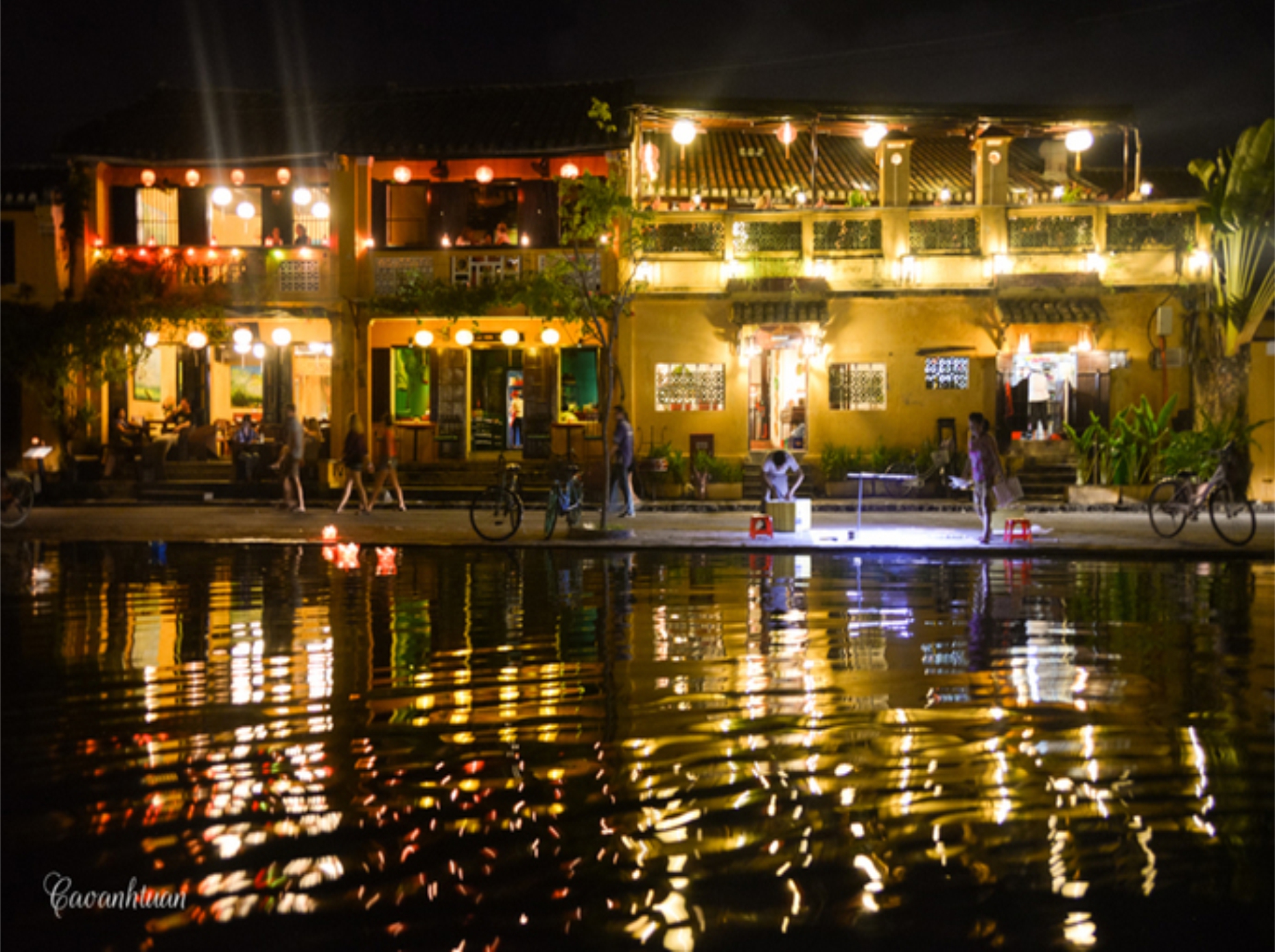 My son mysterious Cham kingdom and holyLand: Cham a people who has a very unique Culture living in Vietnam center from 2-13 then lost their kingdom about 16 cents, now living in Ninh thuan province, around 150 km far from Sai gon (Ho Chi Minh) – Cham has private language, culting divines of Hindu such as Siva, Visnu, Brama….. My son monument inside a 2 square meter velley covering by mountains therefor it has name My son; My is beautiful; Son is mountain; in general: My son is beautiful Mountain.

Da nang the young and energy city, a metropolitant of Vietnam centre, One of biggest entertainment cities of Viet Nam. Long, nice beach and clean inviroment is one plus mark for this city. Inhabitants are just under 1millions,so it still more spaces ,freely …. During Vietnam war (1960-1975) American build a strategic army bases for defense, many marine offices along river and beach,some still left now … such as weapon storages,helicopter airports, gasoline stations…….main aid for Vietnam war. Danang is very convenient  to conneting to North,South country  and outside … with railways, waterway, airway … it has Inernational airport, seaport … it lie on axis of international intergrating: East faces pacific ocean, West contigious to Lao,Thailand in mainland … in general, Danang with  all its favourities, has becoming a  destination for amusement and holiday vacations to Vietnamese and Asia tourists … Depart from Hoi an about 8,9,10.a.m availablely, just 20 minutes drive, you can see MABLE MOUNTAIN Bana hill – a1478 peak, far from Danang centre about 30km on west direction. here having 4 seasons a day; spring – morning: noon – summer; autumm-afternoon; winter-night, from1901-1930 French build here a complex of contructions: hotels, villas, post office, hospital, helicopter airport, bars, wine celler, old French village …. here was a famous resort  in indochina … however, after wars,1947,1960-1975 ,all most contruction here was heavily damaged by artillery from battles. After 1975,Vietnam reunion North-South, Bana has become a wild tourist spot with French ruin villas lie among  jungles and majestic mountains, a quiet and romantic tourist experience … start from 2007 Sungroup built cables to bring tourist from foot to head of mountain, all french village was restored….Bana blooming tourists as days as more. Be take on cable car is a enjoyed experience overlooking the immense forests and floral velleys, mountains below … a paradise  open…

Hue ex-capital of Vietnam during 1805-1945, had been a centre of politics, economics, culture, education … of country. The beauty of unique land with the Ferfume river that flow into city’s bottom and mountains like a fence cover it around made Hue unlike any else in Vietnam. Hue is a example of tradition capital in Asia under feudal regime with royal palaces, citadel, fortifications, pavilions, temples, shrines, royaltombs, royal academics … garden houses … focused numerously, or scattered here, there. Urban and green inviroment ,water paths are well harmony another like Lord’s perfect arrange, Hue folk music local food that learn from royal ingredients and secrect recipes … high recommened to discovery. A full day tour: 2and half hours from Danang center or 3and half from Hoi an, must see Forbidden city 2centuries old, Heaven lady pagoda (Thien mu pagoda) Landmark of country for 5 centuries, on way is Royal tomb  in city’s outskirt… Along trip to Hue stopping at HaiVan pass ,most imposing landscape in Vietnam centre, Langco beach…

“Our  guide Vinh-Glory was excellent ,he paced the time tour well,and he was very informative .He was good company,his English very good.We throughtly enjoyed ourtime with him and would be take around by him again!
MARK BUTIGE AND ROBERT CHATTERSON-BRITIST

Hôi an- Đà nẵng- Huế..tours…The ordinary life, amazing nature, heritage road…” Vinh  was a excellent tour guide-extremely nowledgdeable  & answered all our questions. He is very friendly &we would definityly recommend him to our friends. Thank you Vinh!”
ALLIE  KEIGH-Australian

“Vinh was very kind and patient ,gave us a lot of very interesting information about Hoi An, Da nang and Ba Na Hill.He was friendly and polite.I highly recommend him”
SIMONE MEURANT-Australian

Your pleasure’s my joy

We had a great tour starting from Hue to Hoian. Mr. Nguyen was very patient and knowledgeable. We took a day trip to Paradise cave and were able to see some sights along the way. It was a long way there but worth the drive. Mr. Nguyen was very attentive to all our needs especially with us traveling with three young children. All of our accommodations were fantastic. The resort in Hoian was gorgeous. I wish we could have stayed for one more day. Our driver Troung was also very nice and always had cold water and towels for us on really hot days. Mr… a fantastic tour and the food has been excellent at all the restaurants included in our trip. I highly recommend doing this tour. Tour name: Vietnam Highlights and Siem Reap Package Tour for Ms. Matilde Pableo & family.

Thanks so much Sirs, Madams, Uncles, Aunts, Brothers, Sisters … for your remakables
it will be a motive to improve my services better!